The Pastor’s Daughter
Ebony had a secret….

An ill-advised relationship with a married man in the church sent Ebony down a path of regret, which led to an unplanned pregnancy. When the pressure of being the pastor’s daughter and carrying a married man’s child weighs upon her, emotions flare. Shortly afterwards, she threatens to publicize the entire affair, deciding to bear the consequences of the matter.

Amazon Review- Was this a novel or biography? The events that took place in this story happen so often in church that it is sad. As Ebony Rose told her story I wanted to feel sympathy for her, but I will admit most of the time I was angry with her. And then she would say some of the most profound things through her personal confessions that let you know none of us are exempt from falling prey to sin…. 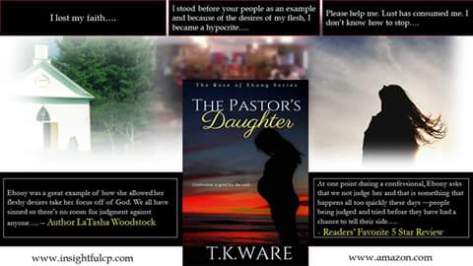 Interviewer: We would like to welcome a very special guest today, the star of “The Pastor’s Daughter,” Ms Ebony Rose.

Ebony: Thank you for inviting me. I wouldn’t call myself a star, simply a young woman who was delivered by the power or God.

Interviewer: Awesome. Well, star or not, I must say that I love the cover. The silhouette and the perfect blend of colors really paints a vivid picture of grief.

Ebony: I can’t take credit for it, but I had a little imput in the final design. I remember that day so vividly. Grief is one of the many feelings soaring through my veins that day.

Question. We will go ahead and jump right into the interview. The show is yours. So please tell the readers who are you.

Answer. My name is Ebony Rose and I am Bishop Rose’s daughter. A few months ago I became a hypocrite to the sermons I heard and the words I shared as a youth instructor.  I allowed my flesh to lead me down a terrible path, which involved a relationship with married minister at the church. I became stricken with conviction and grief and found myself in the valley of decision. When the opportunity presented itself, I decided to share my testimony, in hope to show the dangers of sin and the power of deliverance.

Question. Speaking of testimony, will you please tell us about your story? How was the book created and how much of it is fiction.

Answer. Fiction is created from reality. I’m sure that my testimony is the reality for so many people. At first, TK and I spoke about sharing my story in the form of a novelette. To be honest, I was a little skeptical about publicizing such a personal story. Not because of shame, but due to the fact of reliving the events mentally, as I pour out my heart in written form. My story, The Pastor’s Daughter, is about a young girl caught in an ill-advised relationship with a married man in the church. In the process, a child was conceived. When the pressure of being the pastor’s daughter and carrying a married man’s child escalated, my emotions flared. After an untimely event, which you’ll have to read the book to find out,  I was forced to confess as thoughts of betrayal to God and the church burned within my soul.

Question. Now that’s a story! What made you decide to share this story?

Answer.  Well, a lot of people, women in particular, need to see firsthand, through my testimony, how dangerous uncontrolled lust can take you. Being a pastor’s daughter, I should have known better. I allowed the lust of the eyes to blur all the biblical teachings my father taught me. The Bible speaks expressively about sin, sex in particular. I see too many women disregarding martial vows for a moment of pleasure. It’s sad and oddly present in the church. I chose to become an open book so that people can see and learn from my mistakes.

Question. Wow. I know it took a lot of courage and I commend you for coming forth with such a life-changing story. Earlier you mentioned, ‘Being a pastor’s daughter, I should have known better.’ Do you care to elaborate on that?

Answer. Well, first of all let me say, sex outside of marriage is wrong on so many levels. So many women confuse love for lust and find themselves engaging in all types of sexual activities because of a feeling, created within the canvas of their mind. When you are consumed by passion, at times, the mind cannot discern the difference between love and lust. In the process, sin is birth without any form of conviction. In some instances, you move in together as if you’re married and expect God to bless a lifestyle of such. He frowns upon things like that. The Bible declares in the book of Proverbs: 15:29 ‘The Lord is far from the wicked: but he heareth the prayer of the righteous.’ That scripture alone is self-explanatory. Wicked simply means, evil or morally bad in principle or practice; sinful; iniquitous. I knew people who wouldn’t curse, smoke, or drink alcohol,  but yet they engaged in sexual activities and had children out-of-wedlock. Some had multiple children from the same man without marriage. I’m not here to judge, but the point I’m making is that some of these people have no room to criticize others as if they themselves are living perfect. This is called self-righteous. It’s when you determine the state of your livelihood by the things you are not going, while being blind to the things you are found guilty of. Unforgiveness is a prime suspect for retaliation and resentment. In general, some people live however they desire and attend church on Sunday as if paying penitents for their sinful life. What people don’t realize is that everything you do has consequences. Or as the Bible declare, ‘you reap what you sow.’

Question. Wow again! You are indeed a pastor’s daughter! If you don’t mind me asking, since you know or should I say knew all of these things, how did you become caught up in the whims of your flesh?

Answer. I asked myself the same thing and the only answer I could come up with is found in the Bible. In the book of James, it’s says, ‘But a man is tempted, when he is drawn away of his own lust, and enticed.’ So everything happens by a process. Firstly, you are driven away from truth by your own lust. Lust defined means a strong urgent desire to posses. So in order words, it’s when you see something or someone and desire to have it. In that emotional surge, the conscious is seared and your only objective is the object of your obsession. The enticement comes along when your curiosity is tickled or peaked. This comes in all forms, but the initial type of enticement in regards to human affection is derived from conversation. The more you converse with someone, the more you get familiar with them, and eventually feelings will develop in one way or another, depending on the steer of the dialogue. For me, this led to a path of… I’d rather let the readers found out. Read my story and you will learn more than I can verbally say.

Question. Ha-ha. We all need to read your story and I urge women and men to read it. Ebony, you have said so much already. The eyes of my understanding are wide opened. I pray that many people read your story. Having read it myself, I can assure they will walk away with something planted within their soul. Do you have any final words for potential readers?

Answer. Yes. No one has room to point the finger because we all have sinned and fallen short of God’s glory. You maybe strong now but it took some time for you to get there, so have patience with those who have not arrived or been delivered from their sins. Jesus hates the act itself, but He loves us and by His blood, there is still access to receive His free gift of salvation through repentance.

Surprisingly my story is not complete. I have a prequel and there are two more books in the series. Keep your eyes and ears open!  May God bless you all.

Interviewer: There you have it folks, an insightful interview from Ebony Rose. Before we close out this broadcast, we will share an insert from her wonderful story. Enjoy and be sure to click on the links below for the kindle or paperback edition.

Sunday Morning 9:00 a.m.
A screaming sob ricocheted against the pale blue bathroom walls as Ebony collapsed on the cold, tile floor, a gut-wrenching moan pouring from her lips. A pink and white pregnancy stick floated in the toilet, two lines showing clearly as it sank to the bottom. She curled up on the floor, surrounded by boxes of pregnancy tests, her body shuddering as tears streamed down her cheeks. When her emotions ceased, she dragged herself out the bathroom and knelt before her bed.

“Lord, I have sinned against you. I stood before your people as an example and because of the desires of my flesh, I became a hypocrite. Please forgive me….”

As she poured her heart out in prayer, every sermon her father preached flashed through her head like a caution light. If only she had listened.

Now it was too late.

She didn’t relinquish the position on her knees until they became numb. She pulled herself along the thick beige carpet, stepping over balls of Kleenex tissues, and returned to the bathroom. Her reflection crashed memories of sin on her mind— all she saw was him— the minister she’d been having an affair with for the past few months. The thought of the ill-advised relationship pooled tears in her dark ebony eyes.

As the pastor’s daughter, Ebony was admired for her poise, kind heart and words of inspiration, but most importantly, she was esteemed for her lifestyle of celibacy. Just like the early morning dew, her reputation as an example of holiness among the members in the church would evaporate because of lust….